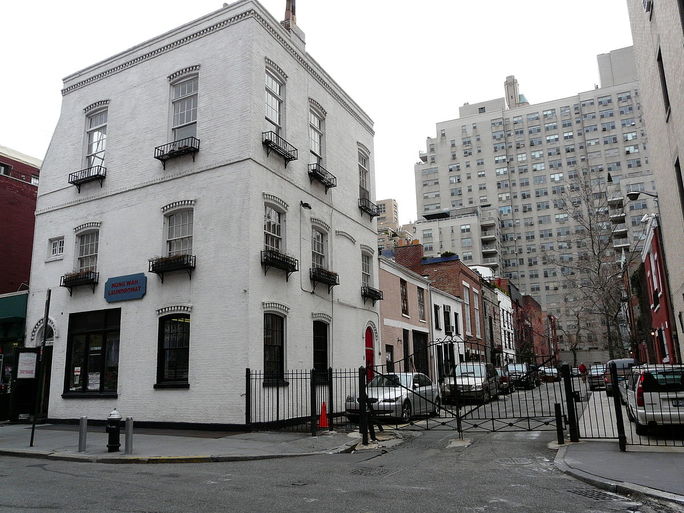 7 of the Most Uniquely Beautiful Buildings & Streets in Greenwich Village

Greenwich Village certainly has a unique charm. It’s an area famous for its role in what many call the Bohemian Revival of the 50s and 60s. The nice thing about The Village is that it’s managed to keep the unique charm from that time—from the jazz clubs to the old-timey restaurants and buildings, it’s all still here.

The Greenwich Village Society for Historic Preservation has done a wonderful job at preserving the places that make the Village so special. You can walk around seemingly aimlessly and manage to find dozens and dozens of photogenic places, buildings, and streets, but if you’re trying to fit in a lot of touring or prefer some direction to your meandering, we’ve made a list of 7 of the most photogenic buildings and streets The Village has to offer… along with a little look at their history.

You’ll find this private gated street between Fifth Avenue and University Place. These gorgeous brick buildings were initially designed as a row of stables for horses before the 20th century and were later remodeled in 1918 to serve as artist studios. The studios were designed by Maynicke & Franke—Maynicke, who had a reputation for building cutting-edge modern lofts, designed the studios. And they’re still cool as heck to this very day.

If you follow Leroy St. and make it to the block that meets with Hudson St. you’ll find yourself at St. Luke’s Place. The row of houses that make the street so special is 3-17 St. Luke’s Place, sitting pretty across from the James J. Walker Park. The houses were all built between 1852 and 1853 and appear to have had just a little extra care put into them when they were being built and designed (compared to the typical 19th-century houses from the time). In the 1920s, the houses were homes to famous editors, writers, and poets of the time. Today, they’re home to very lucky everyday New Yorkers.

It’s hard to miss the Library’s unique tower, which sits at 425 6th Ave. Originally built as a courthouse in 1877, the building was designed by Frederick Clarke Withers in a High Victorian Gothic style. In 1885 it was voted the 5th most beautiful building in all of America. The striking structure was to be demolished in 1958, but the public saved it. Almost 20 years later, in 1977, it was declared a National Historic Landmark.

Tucked away between Greenwich Avenue and the Avenue of the Americas, you’ll find the gated cul-de-sac that is known as Patchin Place. The buildings are believed to have been built in either 1848 or 1849—and in the 1920s one of the small apartments was the safe haven workspace of the late and great E.E. Cummings. In 1969, Patchin Place became a Greenwich Village landmark. The area remains a little piece of time from the early 19th century—you’ll even still find a gas street lamp nearby (well, the casing of a gas street lamp… today, it runs on electricity).

This rare (by today’s standards) wooden house sits at the corner of Grove and Bedford Street. What’s so unique about this building? It’s made of wood in the middle of Manhattan! Something hardly found in today’s NYC buildings with all the updated fire codes. This particular building was built in the early 1800s. And the street on which it sits, Grove Street, has been through a couple previous names—Columbia, Cozine, and Burrows—but ended up with its current name because of all the greenery in the area. The street remains one of the ‘greener’ in the Village today.

At 666 Greenwich Street, you’ll find this bold brick colored building. It was built in the style of Romanesque Revival and designed by architects Willoughby Edbrooke, William Aiken, and James Knox. The building is the largest in Greenwich Village and was originally used by the U.S. Federal Archives because of its size. Since then, however, it has been renovated as apartments, fondly referred to as ‘The Archives’. There’s certainly no other building like it in the Village.

If you decide to wander-with-purpose on down 6th Avenue, you’ll eventually come upon a cast iron gate, behind which is what’s known as Milligan Place, a small, private area very distinct in a place like Manhattan. You’ll see homes that were built in the mid-1800s and a beautiful courtyard. A noted resident of Milligan Place was the playwright, Eugene O’Neill. The courtyard is certainly something we’d cherish if it were in our backyard!

We love that our little hotel is within walking distance to all of these beautiful streets and buildings—they’ve all got something particularly special to offer. If you’re into the unique, don’t hesitate to get going: these are the spots for you. We hope you’ll take our advice and make time to visit them all! 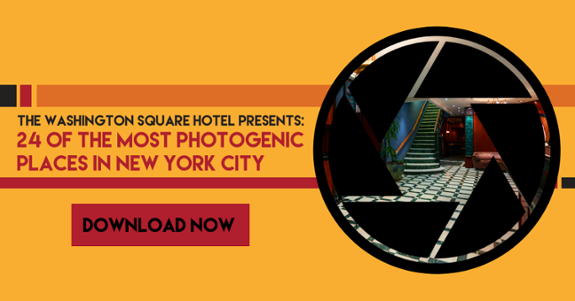