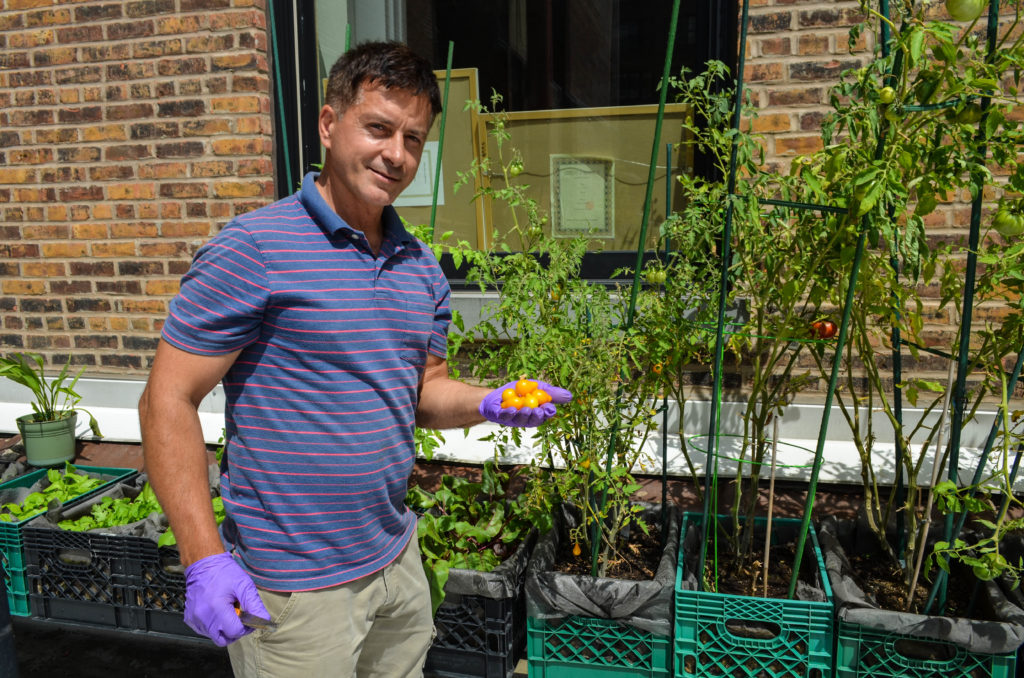 Caring for a Rooftop Garden in the Middle of Greenwich Village

The caretaker of our rooftop garden

He wakes up a little earlier than most of the city, when the sun is just starting to rise He makes his way to the subway to take a train to Lower Manhattan. He walks into the Washington Square Hotel, waves a friendly greeting at the concierge, then takes the elevator to the 9th floor before stepping off to walk up the stairs to the roof. On top of the roof, he lets the sunshine pour over him as he grabs a container and starts picking tomatoes.

Janos partakes in this ritual almost every morning during the summers. For the last 6 years, Janos has been growing and caretaking the rooftop garden atop the Washington Square Hotel. Caring for a rooftop garden in the middle of Greenwich Village takes a special kind of talent and devotion.

You have to be creative if you strive to offer the freshest, local ingredients in your restaurant located in the middle of New York City.

With some planning, experimenting, a whole lot of care and patience from their gardener, what started as a simple herb garden now offers tomatoes, peppers, eggplant, strawberries, and much more.

The garden didn’t get to where it is today without some challenges along the way. For example, due to the weight of dirt, plants, water, and gardening tools, the roof of the hotel couldn’t safely support a garden.

To safely construct a rooftop garden, Washington Square Hotel strategically constructed a raised garden bed out of boxes and crates, which avoids putting weight directly on the hotel’s roof. Once the garden bed was established the Greenwich Village hotel also had to consider things like how water is going to get to the roof and what kind of soil would be ideal for the growing conditions.

Janos says that a lot of the garden’s current success came from experimenting with what worked best as well as giving love and lots of time to the plants. “You have to make sure they have enough sun and enough food and really put in the time to figure out what it is and give the plants exactly what they need for them to grow,” Janos states.

Janos wakes up with the sun and starts his day at the garden by making his rounds and checking on each plant individually. “Everything has unique conditions and requires unique work,” Janos tells us. He says that a lot of his time is spent watching and observing the plants, as well as watering and pruning them. Once the fruits and vegetables start coming in, harvesting typically takes place every day and goes until late fall.

Last year Janos started experimenting with hydroponics to try to increase the number of vegetables harvested.

The results proved positive with tomatoes and he hopes to be able to set up more systems with different vegetables this year and get the same type of return.

So far Janos has seen an increase of positive results year after year. When asked what his favorite part of tending to the rooftop garden was he replied, “It’s a great feeling to harvest something you invest so much time in.”

You can see how much he cares for the garden and its results as he continues by drawing parallels with growing the garden to people, “When we invest in ourselves we see success, we start to flourish. It’s the little details that make up how successful your garden will be.”