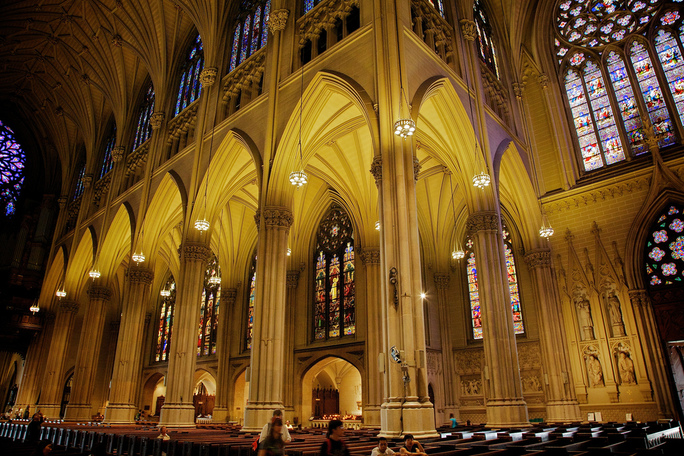 It may as well be a New York City-citywide holiday the way we celebrate St. Patrick’s Day.

But do you know the scoop behind St. Patty’s and why it’s so special? Why do we in NYC, especially, make such a fuss about March 17th?

Let’s take a look at a brief history of St. Patrick’s day.

Well, for one, NYC has the largest number of Irish-Americans of any city in the United States. Quite a feat, if you ask us. But what does this day in mid-March really mean to the truly Irish, and the truly Irish at heart… besides green bagels and brown beer? A whole lot. Here’s the scoop.

The patron saint of Ireland, St. Patrick is believed to have died on March 17th, 460 A.D.

The 17th is the traditional religious feast day of St. Patrick and has been for centuries. However, the celebration has certainly grown since then, and we think it’s rather important to know exactly why we’re celebrating in such an—admittedly—fabulous fashion.

Back in the day, about 500 years ago, in fact, Irish families would attend church in the morning and celebrate St. Patty’s in the afternoon. Lent, a period of 40 days, not counting Sundays, traditionally observed by Catholics to remind themselves of repentance and consecrating oneself to God occurs through March 17th, and per religious rules, eating meat is prohibited during that time.

However, during the holiday, people’s carnivorous tendencies were allowed, and beer, bacon, and cabbage were served after church. That alone seemed cause for celebration, indeed!

Saint Patrick is the patron saint of Ireland, as well as the national apostle of Ireland. His story is fascinating and reaches far back before his death in the fifth century.

We’ll start you with a little-known fact, even to the very, very Irish: Saint Patrick wasn’t born in Ireland.

He was kidnapped in a raid from his mother country of Roman Britain and became a slave in what was, at the time, still a profoundly pagan Ireland. For six years Patrick spent every moment of his life as an enslaved herdsman; as such, he turned to the faith he’d previously thought little of during his childhood in Britain.

Patrick escaped years later but came back to Ireland in his 40s bearing fervent knowledge of Christianity. He made missionary journeys all over the country, and it wasn’t long before Ireland became known as one of Europe’s Christian epicenters.

Roughly four centuries after his death, the Irish people began truly celebrating Patrick’s life, death, and achievements. The first parade for St. Patrick’s Day—the part of the holiday that most of us know and love most–took place not in Ireland, but in our very own United States.

In 1762, Irish soldiers a part of the English military marched through—yup, you guessed it!—New York City, celebrating their patron Saint and their beloved homeland all in one.

Today, we celebrate Saint Patrick’s Day the only way we know how… with the most epic parade of the year, of course!

It rivals the Macy’s Thanksgiving Day Parade (in our most humble opinion, of course), and is certainly every bit as fun. In NYC, the parade marches along Fifth Avenue in order to pass by the most venerable of Irish venues, including but certainly not limited to St. Patrick’s Cathedral.

The parade begins at 11 am and ends around 5 pm. So yes, it’s a long one! And there’s no shortage of celebrating both before and after those hours. Beginning at 44th Street and marching up to 79th, the parade finishes at the American Irish Historical Society at East 80th Street. For a map of the parade route and a bit more information, click here.

If you love St. Patty’s, or even if you don’t but you think you might want to, don’t let this mid-March celebration slip away. The 17th is just around the corner. There’s Guinness to drink, bangers and mash to be had, and lots of Celtic dance performances to be seen along the way.

Not to mention the fact that your ears won’t want to miss the sweet sound of bagpipes in the morning. So mark your calendars now and plan your green outfit accordingly. See you at the parade!

And don’t forget you can always stop by our little Greenwich Village Hotel afterward for a cold one during Happy Hour!