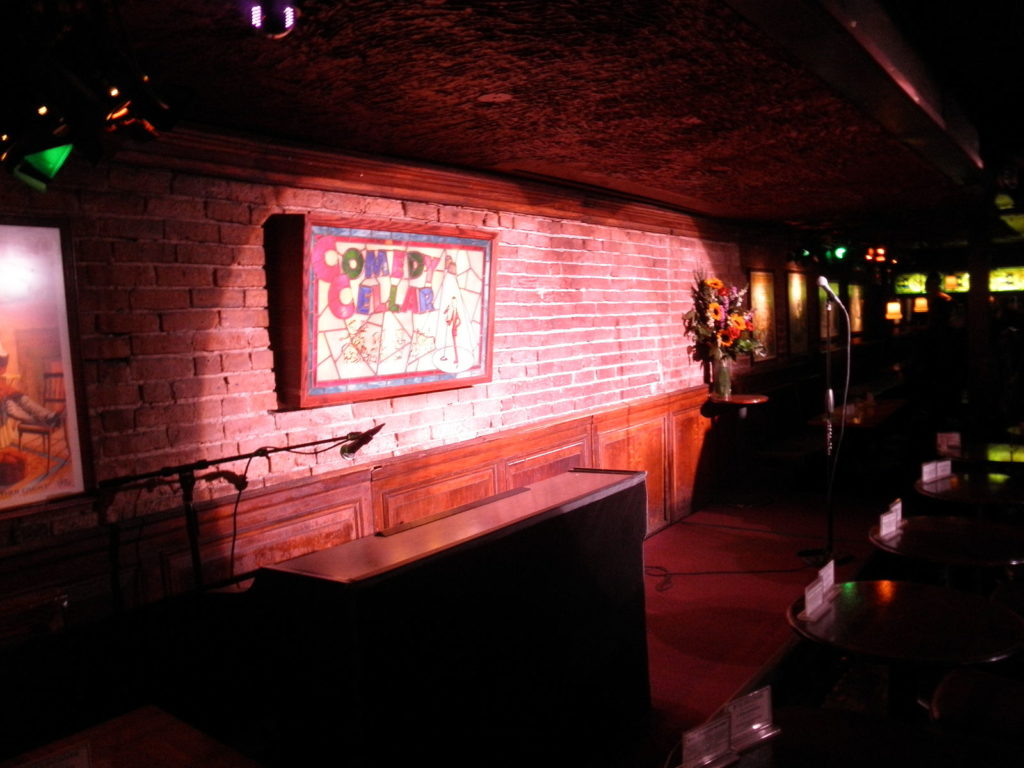 Looking for a Laugh? The Best Comedy Clubs in Greenwich Village

Greenwich Village grew its cultural reputation as a home base for the performance arts since before the 1950s when it was the site of famous cafes and clubs such as The Gaslight, Gerde’s Folk City, and The Bitter End. But there’s more. Today, you can have a few laughs at the best comedy clubs in Greenwich Village.

See the performance art side of Greenwich Village,

Visit one (or more!) of the funniest clubs for an evening of stand up, improv, and open mike – and probably (definitely) some laughs.

The setting for The wildly popular Marvelous Mrs. Maisel Amazon series is the West Village, and you can still visit clubs like the one depicted in the show. Read our article on the locations here

The Comedy Cellar, founded by Bill Grundfest, has been around since the early 1980s. This Greenwich Village staple has earned a reputation with big-name comedians such as Dave Chappelle (Chappelle’s Show), Judah Friedlander (30 Rock), and Louis C.K (Louie) performing regularly.

The club has comedian showcases 7 days a week and is the perfect place to get a laugh from more well-known comedians who are working out new material as well as those who are just getting their start. If you’re really lucky, Amy Schumer or Chris Rock might pop in for a workout.

The Duplex has been on the Village block since 1950. The club is more known for being the oldest cabaret in New York City, but the establishment offers something for everyone.

There’s the Piano Bar, which hosts impromptu open-mic sessions for singers during the week after 9 pm. Go Upstairs, which boasts the smallest stage in the West Village with big talent. As they say, it is where “art meets sexual revolution, and the outcome is one heck of a good time.”

There’s even more at this club including the Cabaret Theater and the Café. You’ll find something going on 365 days a year from sing-a-longs, dancing, jazz, and of course, comedy.

Stop by on Wednesdays for open-mike hilarity.

See what’s coming up next on the calendar on their website.

The Upright Citizens Brigade is one of the most respected improv companies in the country, located in the East Village. They started out in a small theater and have grown to a national organization and school.

There’s a wide variety of performers, from one-man shows, quick sketches or good old fashioned improv!  Enjoy the art of improv comedy here, and if you feel adventurous, take a class or two.

Founded by Al Martin, himself a comedian, is an activist, early supporter of diversity and promoting talented comedians. Some of the now-famous performers who have cut their teeth here are Sarah Silverman, Lisa Lampanelli, Brett Butler, Tracy Morgan and Wanda Sykes. He runs 3 showrooms in NYC. Seats are filled every night with comedy lovers and unbridled entertainment. No wonder Al is called the King of New York Comedy.

Get tickets and calendar here

The club is open on Saturday nights from 8 pm — 10 pm and features some of the best newcomer and veteran comedians in NYC. Once a month they host Thunderbird, with special guest comedians. Past performers have been seen on: Letterman, MTV, BET, and Comedy Central. Want to test your skills? Yup, there are open mike opportunities. Tickets are $20.00 at the door.

Get more info and tickets here

Hosted by American rock singer, songwriter, producer, author, and longtime Greenwich Village resident, Richard Barone, this series plays to the history of The Washington Square Hotel and the self-expression of Greenwich Village. You can check here for information on upcoming shows and to purchase tickets.

The Village has been a place for expression for decades. If you’re ever looking for an evening of off-the-beaten-path entertainment, make your way to Greenwich Village and you’ll find something to laugh about any day of the week.