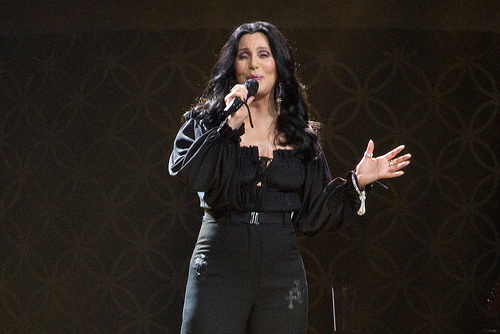 Which Cher is your favorite Cher?

The naive, wide-eyed teenager who came to our attention as one-half of Sonny & Cher, of Got You Babe fame? Or her next incarnation as a solo artist (Half-Breed, Gypsies, Tramps & Thieves) thriving in her own musical variety show while suffering in a doomed marriage to Gregg Allman? Or maybe it's her later when Cher truly comes into her own and proves that she really doesn't need a man at all.

If she could turn back time (you got that, I know you did), I think Cherilyn Sarkisian Bono Allman would appreciate all three incarnations, and all are represented in the new Cher on Broadway show at the Neil Simon Theater.

Three actresses play each version of the diva.

Micaela Diamond is the "Babe" Cher of the early days. Cher in her middle years, named "Lady" in the show is performed by Wicked veteran Teal Wicks, and the mature Cher, aptly dubbed "Star" is portrayed by Stephanie J. Block.

Sonny and Gregg also take the stage, along with the man who was perhaps Cher's greatest love of all, Bob Mackie, her dress designer. Calling all drag queens! The spectacular dresses will be paraded about...plenty to drool over!

(To see Cher on broadway in person you pretty much have to take out a new mortgage on your house, so this is a great deal!) Check it our if you're a fan of this 72-year-old diva. (Mick who?)