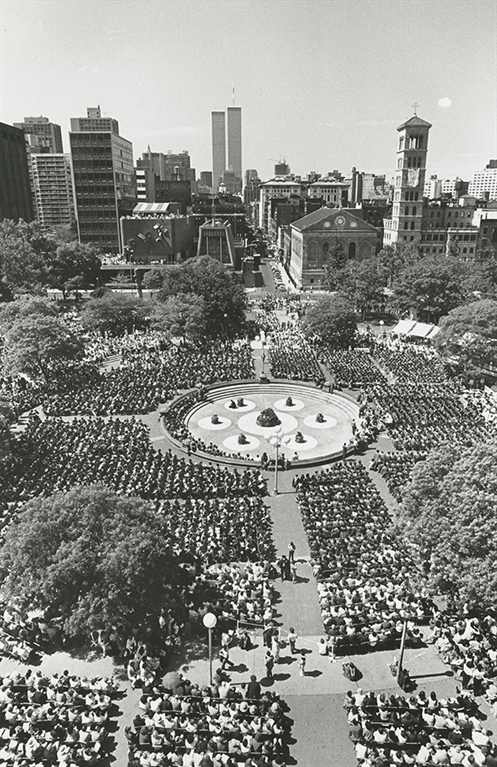 New York University is almost synonymous with Greenwich Village. So much so, that the Washington Square Arch is an unofficial symbol of the University for many students. But it wasn’t always this way.

These 6 tidbits of information you probably don’t know about NYU and Greenwich Village show how the growing University has become a part of The Village and how it has intertwined itself with its colorful and creative past.

1. The NYU Commencement used to be held in Washington Square Park.

Unfortunately, due to the redesign of Washington Square Park and the loss of space, meaning the accommodation of about 5,000 fewer people, a full-class commencement will probably never be held in the park again.

2. In 1924, Thomas Wolfe accepted a position teaching English at NYU.

The Greenwich Village resident taught on-and-off again for seven years after accepting the position. Wolfe’s pay for his first seven-month teaching contract was $1,800. It was during Wolfe’s time in Greenwich Village that he completed the first draft of ‘O, Lost’ which would later become ‘Look Homeward, Angel’.

It was also in Greenwich Village that Wolfe’s work was edited by one of the most well-known editors at the time, Maxwell Perkins at Scribner’s. Wolfe is said to be one of the most influential writers of his generation.

3. The very first NYU class was not held in Greenwich Village.

The very first classes at NYU were held in Clinton Hall, further downtown near City Hall. The Washington Square campus, however, has been a part of the University since it was first established (though it has only more recently become the main campus that so many people associate with NYU today).

4. The Washington Mews, a Greenwich Village historic staple, is NYU housing and offices.

This historic landmark row of housing is located between University Place and Fifth Avenue between 8th Street and Washington Square North. You might walk right by it if you are not looking for it!

It was first established as horse stables for prominent families in the area. In the early 1900s, they were renovated into artists’ studios.

It wasn’t until the 1950s that NYU started to lease the properties and convert them into offices and housing for the University.

To this day, The Mews remains partitioned off from the surrounding area by beautiful iron gates which open like a doorway into the past, onto early 1900s style buildings and a quaint cobblestone street. You can walk through them into another time and place.

5. You can find the façade of Edgar Allan Poe’s Greenwich Village House on the side of NYU’s Furman Hall.

Edgar Allen Poe moved into his house at 85 West Third Street in 1844. It was during this time that he wrote one of his most famous works, ‘The Raven.’

He was a regular guest at New York University’s Eucleian Society and undoubtedly drew inspiration through his associations and discussions with its members.

In 2000, NYU wanted to demolish the building to expand the law school, however, there was an uproar about it being the last “Poe House” remaining—Poe lived in multiple locations across New York City and the Poe Cottage is in the Bronx.

As a compromise, NYU agreed to preserve the façade of Poe’s Washington Square house at 85 West 3rd Street which is now NYU’s Furman Hall.

6. The Provincetown Playhouse, famous for putting on plays by Eugene O’Neill, is now part of the University.

This historic off-Broadway theater located at 133 MacDougal Street has been a Greenwich Village artistic staple since its opening in 1918. Eugene O’Neill, a Greenwich Village regular and master of American drama, had many of his early plays produced by the Playhouse.

The building is now part of the NYU Steinhardt programs and was restored to its old glory in 2010. Today you can still catch readings, music, storytelling evenings, and performances, as well as other events.