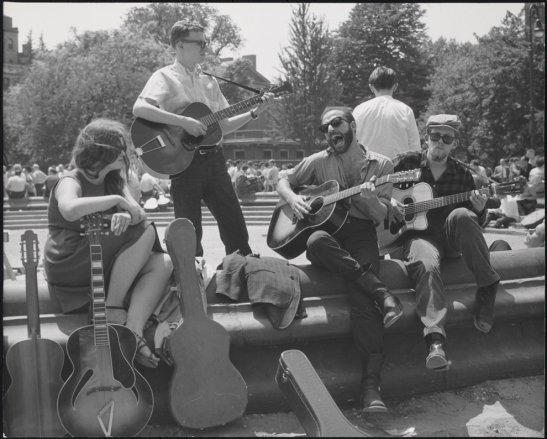 When September comes, it brings more events than usual to look forward to in Washington Square Park. One of those great events that celebrate a big part of Greenwich Village’s identity is the Washington Square Folk Festival, which is usually held at the beginning of the month. Inspired by this yearly event that reconnects us to our folk roots, we’ve picked some of the most important parts of the history of the folk music movement Greenwich Village helped cultivate.

American folk music existed a long time ago and its resurgence in the 1940s set the stage for western and country and even rock and roll music. During the 1930s and especially the 1940s folk musicians such as Woody Guthrie (a huge inspiration to Dylan) gained general popularity through writing and singing songs expressing his personal views on poverty and unionization in America. A contributing factor to the genres gained popularity in New York City, specifically, was the revival of interest in square dancing and folk dancing across the City. The early 1950s sent folk music in a different direction as things got political with the 1950s Red Scare. Folk music had gained a stigma of being politically associated with the left. Folk musicians and even icons like Pete Seeger were forced to take a more underground approach to performing during this time and into the late 1950s. People who once experienced popular success were now being heard at college-campus concerts, summer camps, and coffee houses. After being pushed out of the mainstream, the folk scene quickly became part of the bohemian lifestyle popular in Greenwich Village at the time. During the late 1950s, folk music started to regain some of its previous popularity with the discovery of The Kingston Trio, who played folk and even covered songs by popular artists from the 1940s without the political statements.  Over the next decade, they were followed by a wave of artists like Joan Baez and Bob Dylan who continued to push the envelope with their music and aligned themselves with the civil rights movement intertwining political expression with their music. Greenwich Village became a sort of haven for musicians of the time with an entire ecosystem of clubs and cafes such as Gerde’s Folk City, Café Wha?, The Bitter End, and The Gaslight Café supporting up and coming musicians. The Village was one of the country’s most idealistic thought centers and served as a source of inspiration for the many artists living in the area. Greenwich Village’s tradition as a center of inspiration and great music continues. Please, come down and experience the folk festival and stop in and visit us at North Square restaurant and bar located on the northwest corner of Washington Square Park! Photo Credit: Museum of the City of New York 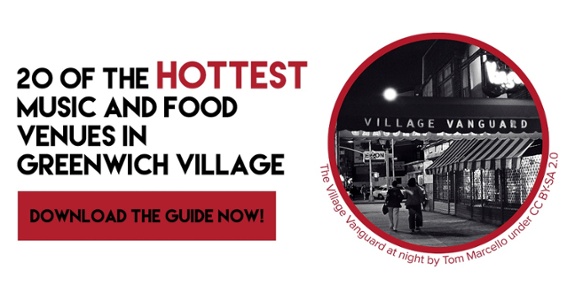